Guns & Gear profiled a host of SureFire tactical products, including the Stiletto® Pro and Stiletto® flashlights, the XVL2 WeaponLight and the SOCOM556-RC2, SOCOM300-Ti and SOCOM260-Ti suppressors, on a recent episode, which you can view below.

The Stiletto Pro and Stiletto deliver SureFire’s high-quality LED lighting performance in a slim, easy-to-carry form factor with convenient recharge capability. Both models feature SureFire’s MaxVision Beam® technology, providing a seamless wall of light that is optimized to the response of the human eye and ideal for close-range task and tactical use. Both models offer three output modes, with the Stiletto Pro delivering a maximum of 1000 lumens and the Stiletto 650 lumens when set to their highest output. Both models can also be programmed to activate from low to high output or vice versa. The Stiletto body incorporates a Mil-Spec hard-anodized aluminum head and durable glass-filled polymer main body. The beefier Stiletto Pro incorporates Mil-Spec hard-anodized aluminum for both the head and the main body similar to most SureFire flashlights.

The SureFire XVL2 WeaponLight was developed at the request of special operations customers and is the result of years of R&D. Compact, lightweight, and optimized for use with handguns and SBRs, the XVL2 features a 400-lumen white light LED, a 300mW infrared illuminator, and both infrared and green aiming lasers co-aligned and slaved together for ease of zeroing in one simple step. Available in a civilian-legal Class I version as well as a full-power, restricted Class IIIb model for Military and Law Enforcement, it can be ambidextrously activated in both momentary and constant-on modes. A mode selector dial allows the selection of illumination and/or aiming lasers, as well as a low-power training setting on the full-power, restricted MIL/LE version. All this capability is powered by a single 123A battery that can be changed from the front, eliminating the need to remove or re-zero the device.

Guns & Gear airs on the Sportsman Channel and WildTV and showcases the latest and greatest products in the firearms industry with interviews, range demonstrations, tips and training techniques. You can watch more Guns & Gear episodes and bonus features on Gun Talk Media’s YouTube, Facebook, Roku, Amazon Fire and Apple TV channels, and at http://www.guntalk.com. 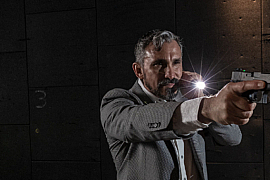 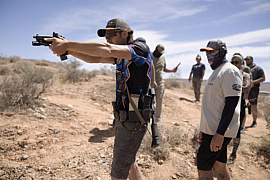 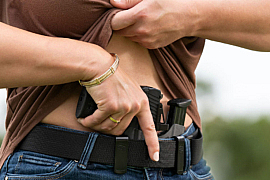