For more than 40 years, SureFire has maintained a proven track record of innovative products trusted by military and law enforcement agencies that put lives on the line and go into harm’s way to preserve freedom. Introduced on April 1, 1991, the L75 Infrared Laser Sight had a profound impact on the weapon-mounted laser sight market.

The L75 was the tool for military and law enforcement operators seeking the ultimate in IR target acquisition for rifle use. Uniquely designed, robust and rugged, it advanced the state of the art that SureFire established in 1990 with the L70 (also known as the 7LSM), which introduced the industry’s first solid state laser sight. Unlike the L70, however, the L75 was designed to be invisible — specifically for use with Night Vision Devices (NVDs). Its constant 5-milliWatt infrared beam featured a wavelength of 830 nanometers, preventing it from being seen by the naked eye while allowing users to acquire and track a target without revealing their position.

The L75 could be threaded conveniently into existing Surefire WeaponLight systems, including SureFire’s Model 628F, 629 and 629F dedicated WeaponLight forends for H&K MP5 submachinegun and H&K 94 and 53 carbines. It was also adaptable to a wide variety of weapons via numerous SureFire mounts, and it could be activated quickly via compatible SureFire tape switches.

SureFire’s forward-thinking engineering is part of what made the L75 so innovative. It incorporated a hard-mount design that eliminated the need for adjustment springs and screws, which were susceptible to vibration and recoil. Instead, a pair of precision optical beam adjustment rings made the L75 easy to zero by keeping the laser diode in a secure, fixed position while its adjustment rings could be manipulated to set the beam on target. Once zeroed, the adjustment rings were locked into position via locking screws, effectively turning the L75 into a solid assembly that maintained zero and withstood the forces of recoil and rigorous use on the battlefield. Calibrated windage and elevation scales were engraved on the L75, allowing it to be swapped onto different weapons with ease. So long as the operator new the pre-established settings for each weapon, the laser could be zeroed quickly and ready for action.

Like all SureFire products, the L75 Infrared Laser Sight was designed to take punishment in harsh conditions. Its hard-anodized aluminum body resisted abrasion and the elements, and its O-ring seals provided waterproof submersion protection to a depth of 30 meters. And yet it was extremely light. The L75 weighed 4.6 ounces, mitigating any adverse effect on weapon handling.

Today, the same benefits proven by the L75, including no-compromise performance, supreme reliability and ease of use, are found in a variety of SureFire WeaponLight/laser sight products for pistols and rifles. IR-capable WeaponLights such as the XVL2, XC2-A-IRC, and infrared Scout Light Pro models are still trusted by everyone from elite military teams to citizens with the utmost commitment to personal defense. In the most hostile environments, when only the best tactical illumination tools and equipment will get the job done, SureFire has you covered. 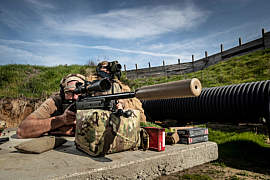 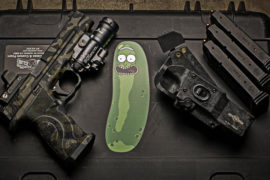 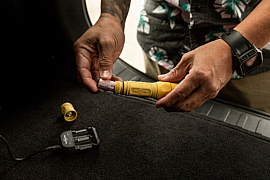