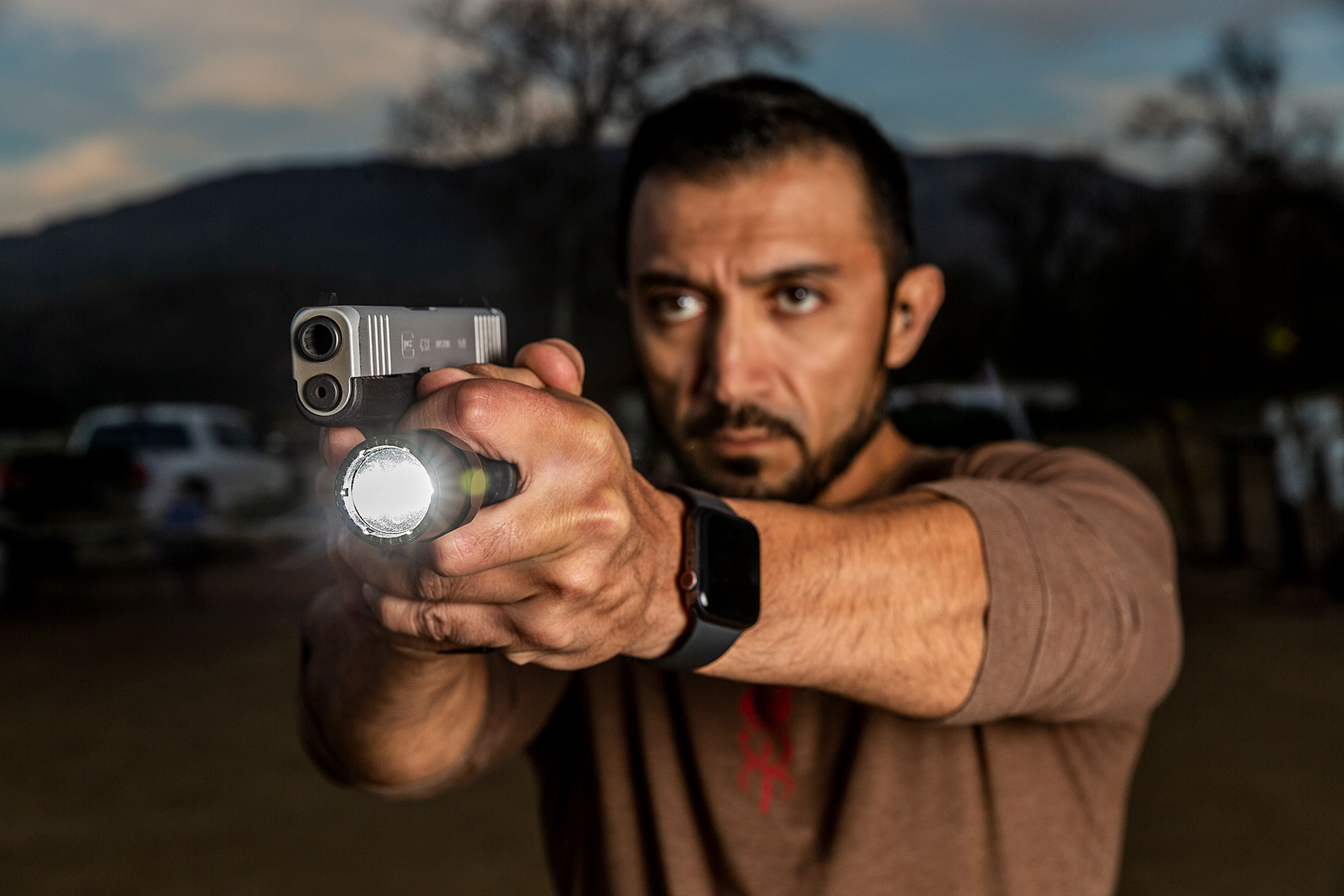 SureFire CombatLightThe Solution to a Handheld with a Handgun

Weapon-mounted lights, such as the gold standard SureFire X300U for handguns, are the optimum way to operate a firearm in low light conditions. They allow for proper control of the firearm for increased accuracy and faster follow-up shots, make it significantly easier for weapons manipulations such as malfunction clearance or reloads, and lastly free your hands for other tasks such as opening doors or utilizing items in your environment.

It isn’t always practical or possible to have a weapon-mounted light on your firearm, but a tactical light is still essential for positive target identification. In these cases, a handheld light may be the only option. That’s why using a handheld flashlight in conjunction with a handgun remains a staple technique for self-supplied tactical illumination in lethal force encounters. Unsurprisingly, SureFire has promoted this critical skill for over 30 years, and we developed the very first flashlight to incorporate a unique configuration specifically to facilitate it: the CombatLight.

Introduced on July 1, 1997, the SureFire 6Z CombatLight sprang from the fertile mind of company founder and president Dr. John Matthews. The 6Z was the result Dr. Matthews’ study of a shooting technique developed by former FBI agent Bill Rogers. A top firearms instructor and talented holster designer, Rogers was well-aware of the method invented by former Marine Michael Harries, in which the shooter holds the light in an “ice pick grip” with the support hand, pressing the back of that hand against the backside of the shooting hand.

While the Harries Technique was frequently taught in law enforcement academies and combat pistol classes throughout the 1970s, it failed to maximize the advantages of using the compact, high-output, handheld illumination tools that SureFire pioneered in the late 1980s. Rogers recognized that a compact SureFire light could be clenched between the index and middle fingers — like a syringe — and squeezed into palm of the support hand to activate it. Even better, the SureFire/Rogers technique naturally indexed the light beam with the muzzle to facilitate target identification while allowing the user to maintain a solid two-handed grip on the weapon.

To provide sufficient traction on the original 6P light, the inventive Rogers slipped a coil of bicycle inner tube around the body. When Dr. Matthews was informed of this, he immediately brainstormed an equally innovative improvement: machining a SureFire 6P flashlight with a reduced circumference in the center of the body and slipping rubber O-rings onto the narrow section. Testing proved the efficacy of this approach, and SureFire engineers quickly designed purpose-built rubber grip rings and improved tailcap switch to provide maximum control when used with the Rogers-SureFire technique. The 6Z CombatLight was born, and its unique CombatGrip added to the legacy of U.S.-patented SureFire innovations.

The 6Z was a tremendous hit right out of the gate, and successive SureFire CombatLight models soon gained additional accolades for both the design and the technique that fostered it. The SureFire Z2 CombatLight was issued by the FBI to all graduates of the FBI Academy at Quantico, Virginia, and the G2Z CombatLight became the official tactical flashlight of the National Rifle Association.

This legacy continues today with SureFire’s G2Z MV and G2ZX CombatLights. Their rugged, polymer bodies and CombatGrip design are perfect for various flashlight/handgun techniques, providing a secure hold even with wet, cold, or gloved hands. The G2Z MV features another SureFire innovation, the shadow-filling MaxVision Beam®, which delivers a seamless, 800-lumen wall of light ideal for close-range vision and excellent situational awareness. Its tactical tailcap provides instant momentary-on activation — simply press for momentary-on or click for constant-on. The G2ZX incorporates a parabolic-reflector for 600 lumens of long-reach illumination that’s also ideal for searching through open doorways, down long hallways, and up into ceiling rafters. Its orientation independent tailcap switch is pressed for momentary-on activation and twisted for constant on.

And there is a third option, the D3FT CombatLight, available exclusively through Haley Strategic. D3FT stands for Disruptive 3nvironments Fireﬂy Technique. Developed by veteran Force Reconnaissance Marine Travis Haley in collaboration with SureFire, it is the first concealable EDC CombatGrip light on the market, and it delivers a powerful and efﬁcient light that maintains performance in a compact design powered by a single 123A lithium battery. The D3FT packs 500 lumens of white light shaped by SureFire’s proprietary TIR reﬂector to produce a bright central cone of light for extended reach. A peripheral cone of light surrounds the central cone to aid situational awareness. The D3FT also features a machined aluminum plunger for a consistent and reliable grip, a rugged Mil-Spec hard-anodized aluminum body, a click-on/off tailcap switch, and a robust pocket clip for easy access carry. Like the G2Z-Mv and G2ZX, it is also backed by SureFire’s No-Hassle Guarantee.

Whichever model you prefer, every SureFire CombatLight model provides superior ergonomics and foolproof switching even under the most stressful combat conditions. For more information, visit SureFire.com.