Engaged in a real-time, life-and-death simulation at Warfighter Academy, I can see the suspect and hostage to my left; they don’t see me.

Maneuvering into position and dropping to one knee, I peer out from behind my barricade, but I quickly realize that I’m out of the shooting platform and can’t take the shot to save the hostage. In the split second it takes to correct the mistake, my right ass cheek suddenly feels the sting of a hundred hornets as I get lit up by another enemy I didn’t see.

I’m out of the fight. And if this was the real deal, I’m dead.

Just another fun play day on the paintball field or Airsoft range? Not hardly. I’m learning techniques that could one day save a life in a live firefight. So far, though, all I’ve learned is how to be a victim. I’m pretty good at that, but it’s still early in the day. Later, when I ask Master Instructor Dave Maynard for a condensed description of Warfighter Academy’s curriculum, what he says will make a hell of a lot of sense. Kicking back on a wooden bench under the grayish lighting of the indoor tactical range where the training took place, he’ll think for only a second before delivering his answer.

“We train you so that if you went up against yourself the way you were when you got here, you’d slaughter that guy,” Maynard says. And he’s right.

A former Navy Seal who completed numerous combat missions up through 2012, Maynard has dedicated his life to teaching the art of gunfighting for more than 30 years. Actually, it’s not so much art as it is an interconnected group of principles that you should know if you ever hope to survive a CQB on more than just dumb luck. Know how to implement them and you’ll know how to act.

“If you’ve never been under fire, then how do you know?” Maynard says. “I was actually in the last SEAL platoon trained to go to Vietnam, but we didn’t go to Vietnam. So when I got out of the Navy, the idea of how I would respond under fire was a mystery. If you’re serious about what you do, that’s like your number-one fear — that you wouldn’t be good under fire and you’d let your teammates down under fire, which is a nightmare.”

But Maynard is supremely confident that Warfighter Academy’s techniques can help anyone be more effective in a high-stress combat situation. So much so that to prove it he invited a group of SureFire employees to Tac City Airsoft in Fullerton, California, to experience gunfighting the Warfighter Academy way. SureFire’s 40-year history includes a legacy of firearms and combat training advocacy, and this particular opportunity was coordinated through SureFire’s Suppressor Division. The event would provide a legit education for many of the attendees, even some with prior military and law enforcement experience.

The Warfighter Academy concept is based upon basic principles that increase your odds of winning a gunfight. They include: never getting out of the shooting platform; understanding cross angles; reading the light in your battle space; and understanding that action is always faster than reaction. It all sounds like common sense that should be easy to apply — call it Combat 101. But Warfighter Academy trains its students by teaching these principles in force-on-force situations where the adrenaline of the moment fuels a lot of mistakes. The tools of choice are Airsoft rifles and pistols, and they are tools, not toys. Before the day was over, several participants would head home bearing “souvenirs” of the training, in the form of numerous red pock marks on any skin left unprotected by clothing or the required safety equipment. Backs. Arms. Foreheads. Almost no one came out of it unscathed.

“Airsoft is the way to go,” Maynard says. “You can shoot a gazillion rounds. If you were shooting Sims at 50 or 70 cents per round, the bill would be astronomical. And you get to see what everybody, and I mean everybody, does under fire. This isn’t even real fire, and yet it’s enough to pump the adrenaline up to where everything falls apart. We teach you how to overcome that.”

Warfighter Academy’s techniques aren’t fun and games, although they were more or less developed that way. After leaving the military, Maynard started playing paintball as a sport, but he quickly realized that he wasn’t any better than the average player.

“I was a pretty good athlete, so I didn’t like finding that out,” Maynard says. “So I set up my own paintball field in my backyard. I started implementing various drills, such as the shooting platform, box drills and reading the light, and I shared them with my paintball team. Pretty soon, we were beating everyone. Then I got this amazing job at Fleet Training Center, and we got to use paintball guns on a ship. I was getting paid to shoot sailors, doing CQB, while training my paintball team, and I started seeing issues. I began to disagree with the tactics I was taught in the Teams. I started implementing my paintball techniques because I thought, ‘We should be doing it this way.’ Then I got back into the SEAL Reserve Unit, and I brought SEALS into my backyard to start training with them. We’d have 20 SEALS against five members of my paintball team — and one of them was my 12-year-old-son, and my paintball team was just wiping them out.”

What started in the mid-1980s is now a way of life at Warfighter Academy, where each session always starts the same way. After our initial orientation and safety briefing, Maynard divides our group into five-on-five teams and tells us to “just go shoot each other.” He then takes to the catwalks above the range and videotapes the entire battle. Afterward, we assemble to watch a replay, much like a sports game film, whereby Maynard picks out various team members and discusses their technique – or rather lack thereof.

“I don’t care who you are, everybody gets an A+ in screwing up when they first get here,” Maynard says. “The key is in what you do from there.”

And so the discipline begins, drill after drill, learning how to become a more effective gunfighter by employing Warfighter Academy tactics. We learn the shooting platform, which means keeping your weapon in the ready position — indexed on your cheek at all times — whether you are shooting or merely moving into position. Being in the shooting platform eliminates any hesitation in readiness, as the split second it takes to raise your weapon, aim and fire could prove to be fatal.

“Once you establish your shooting platform by establishing your cheek weld, you just leave that stock right there,” Maynard says. “The problem when you don’t is that every shot is a different shot. You don’t have any reference. When you lock it in and touch your cheek, there’s your reference point. Everything is lined up. All you have to do is let the shot go. Then when you go to the other side, touch your cheek, and it’s the same. The other key to the shooting platform is leaning forward. If I stand straight up, I have to bring my head down to get a sight picture. But if I just lean forward, it goes right there whether I go left, right or kneeling. I’m always locked into that position.”

Warfighter Academy’s instructors also demonstrate the importance of being able to instinctively move your weapon from right shoulder to left shoulder, depending on whether you are barricaded behind a right-hand or left-hand corner (which is the opposite of the way it sounds), so that you are always leading with the weapon and not your body.

“If you lead with any part of your body, that part is exposed,” Maynard says. “Even if you just stick out your front foot, you are giving an enemy something to target. And you do not want to get shot in the knee. Because then it buckles under your weight and leaves you out in the open, and it’s all over.”

One of the most effective exercises is the four-man box drill, which underscores the tactical advantage of understanding cross angles in a firefight.

“The box drill is designed to focus on fighting around corners,” Maynard says. “It isolates just that point of discovery when have to look around the corner with the very real possibility of getting shot. We put you behind one barricade with another one directly in front of you and one to your left. So when you look around the either side of your barricade, you are fighting someone looking at you from their barricade. We make it a one-shot drill, but if you get hit you still continue the drill. The pain of getting hit is a key to learning, but you also start to evaluate instantly what you see when you look around the corners.”

Later in the day, we learn how to clear rooms using the “J-hook,” a technique that can easily be applied in home defense scenarios where a bad guy might be hiding in the corner of a room. We train with a host of SureFire’s combat-proven M300C and M600U scout lights.  We run active shooter/hostage drills, sector clearing drills where large teams are tasked with locating and eliminating four-man teams of evildoers. Even though it’s only a one-day session, we can see Warfighter Academy’s instruction start to take root. By the afternoon video sessions, Maynard’s comments are directed more toward fine-tuning than a complete tear down and rebuild of tactics.

Sure enough, watching the five-on-five teams compete against each other at the end of the day is like watching an entirely different group of people. Their movement is more coordinated. Their attack is quicker and more effective, and their discipline is far greater than it was at the beginning of the session. The battles rage much longer, and Maynard is impressed by the transformation of what he initially referred to as a bunch of American goofball office workers on the low end of the tactical food chain.

“They were super-responsive to the training,” Maynard says. “I didn’t feel one attitude issue, and nobody geeked up on us. Everybody worked hard, and everybody was going for it. They were just go, go, go. When you have a student with an attitude like that, nobody can stop them. You just keep feeding that fire, and they get better and better. That’s exactly what you see. The quarterback taking reps in practice and completing every pass is quite a bit different than the quarterback trying to make that same pass with an entire defensive line crashing in on him. And the only way you’re going to learn how to deal with that is to have those suckers come at you in real time. It’s the same thing here.”

Warfighter Academy deserves kudos for providing students a real-time education with useful tactical strategies that could make a huge difference in a stressful live-fire scenario. For some, it can be a real eye opener.

Not at the beginning of the day, maybe. But after a session with Warfighter Academy, at least we’re on speaking terms.

SureFire does not subscribe to or recommend any Techniques, Tactics & Procedures discussed by instructors referenced. SureFire is a manufacturer of the finest tactical products on the planet, and leaves it to the professionals to decide how best to implement them. 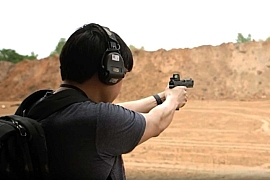 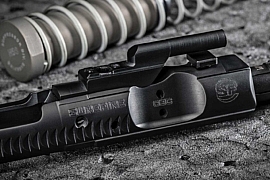 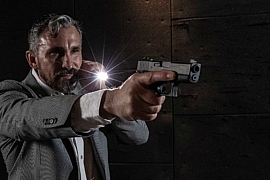 Active Shooter Considerations for Those Who Concealed Carry