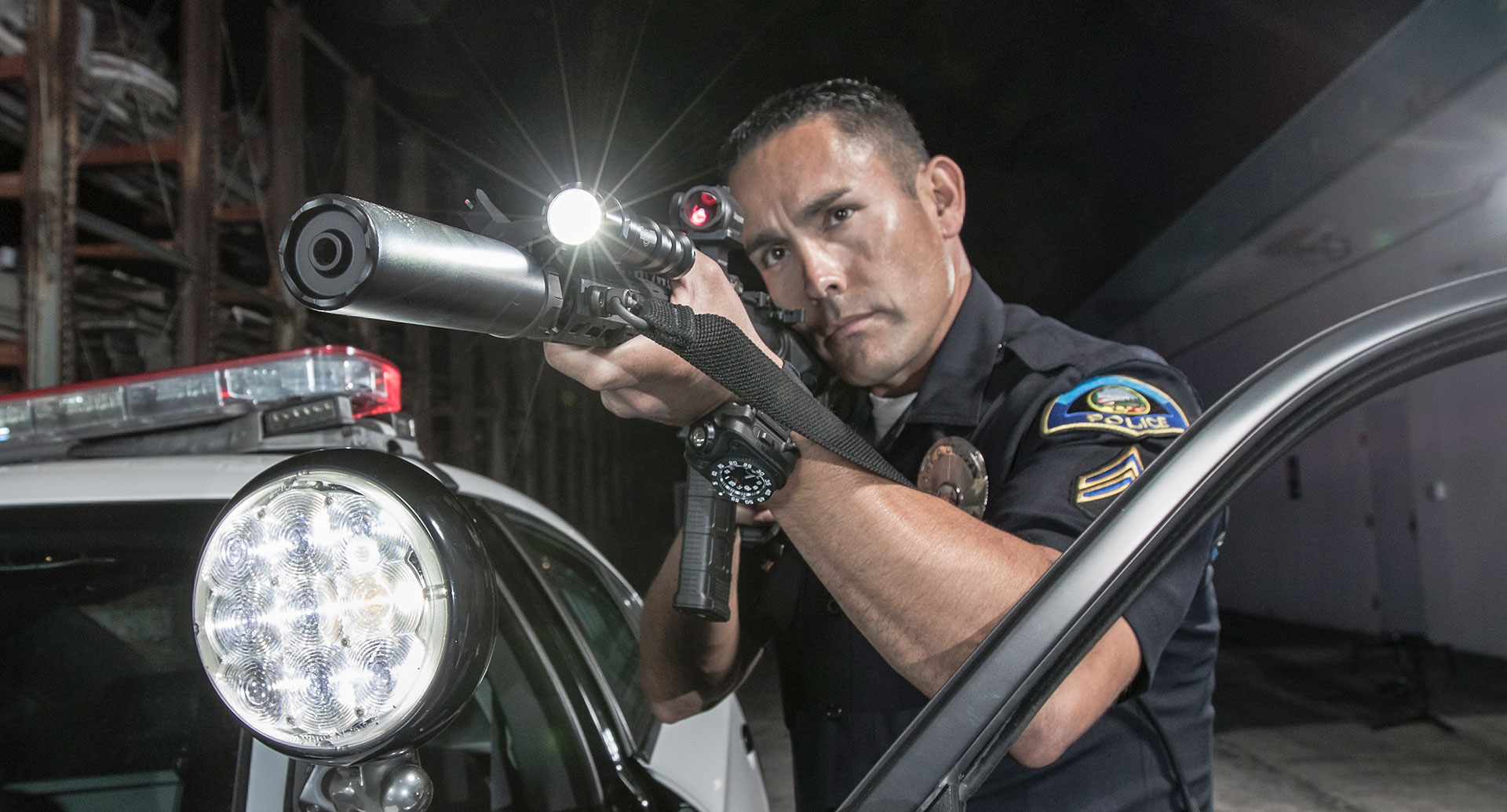 More than a decade’s worth of law enforcement customer feedback has proven what we’ve always known: Law enforcement units equipped with SureFire SOCOM Fast-Attach® suppressors are safer and more effective than those that aren’t. Suppressors are valuable tools that protect the hearing of SWAT members, patrol officers, and innocent bystanders in the event of an officer-involved shooting.

Not only are SureFire suppressors extremely effective at reducing sound, muzzle flash, and dust signatures, they have an impeccable record in the most extreme conditions. Their tremendous durability played a crucial role in SureFire winning the most rigorous suppressor trial in history. SureFire secured the United States Special Operations Command (USSOCOM) contract to provide suppressors for our military’s Mk18 and M4 rifles in 2012, and USSOCOM renewed that agreement in 2019. SureFire has earned a reputation as the professional’s choice.

LE Suppressor Use: Understanding the Need
To understand that need, consider that the average unsuppressed .223 rifle produces 165 dB of noise—more than 250 times louder than the moderate 85-dB noise considered harmful to the human ear. Muzzle noise can also amplify in enclosed CQB spaces, such as inside a room or in a vehicle. This noise impulse can harm an officer’s hearing and the hearing of anyone else in the area. In addition to long-term effects, firing these weapons without hearing protection can also create a tactical disadvantage by hampering team member communication—either person to person or where radio comms are involved—and potentially disrupt focus on the mission. 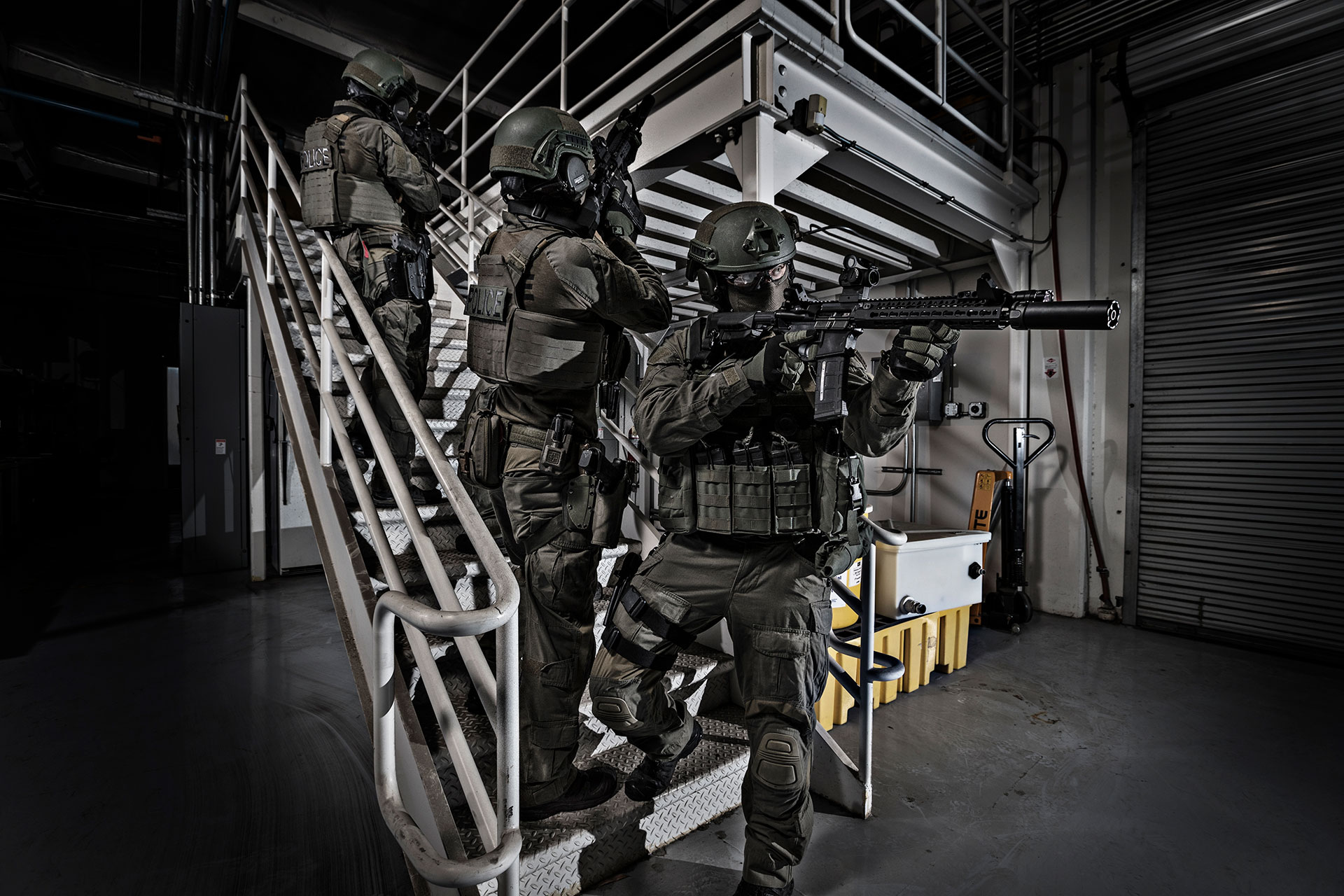 A Smart Move
In the earlier days, Heckler & Koch MP5’s were prevalent among the larger SWAT teams in the nation. As more agencies realized AR platforms were ballistically a far superior choice, the AR’s increase in muzzle report and blast overpressure cemented the need for suppressors as standard equipment. With that in mind, it is no surprise that SWAT teams were the first to use suppressed rifles in law enforcement.

With that journey, many departments realized the health and safety benefits of suppressing their AR platforms. From a liability standpoint, when one considers the potential for hearing damage claims in officer-involved shootings, suppressors are extremely cheap insurance. They also provide the safety advantage of increased ability to communicate both verbally and via radio.

While multiple agencies are now running suppressed rifles for both patrol and SWAT, the Kent, Washington, P.D. was one of the early adopter agencies. Kent needed a solution that reduced the sound signature of the Colt Commando rifles used by its SWAT team, and research showed that suppressors could generally reduce harmful noise by around 30 dB.

Ten Years After
In 2018, more than 10 years after receiving its first batch of SureFire suppressors for SWAT, the Kent P.D. recommended and received budget approval by the Police Chief and administration to purchase and issue SureFire SOCOM suppressors to every one of its patrol officers. One can only hope that the trend toward suppressor use on patrol officer-issued rifles continues. Suppressors provide safety benefits that help police do their jobs more effectively.