Chances are good that if you’ve ever been involved in ground combat on a battlefield, you’re probably familiar with the M2 machine gun.

That’s because the legendary “Ma Deuce” is one of the most prolific crew-served weapons in military history. Employed by hundreds of countries around the world, this belt-fed, air-cooled, .50-caliber weapon system has been successfully used on land, on the sea and in the air during every conflict since World War II. Designed to support both offense and defense by providing a heavy volume of close, accurate and continuous fire, it is capable of delivering up to 850 devastating rounds per minute at 3,050 feet per second to a distance of up to 7,400 meters. The M2 can destroy lightly armored vehicles, aircraft and enemy fortified positions.

Kirk Sorensen, Firearms Control Monitor and Company Armorer at SureFire, LLC, has plenty of experience with the M2, having been assigned to an MRAP-mounted M2HB in Afghanistan during his service in the U.S. Marine Corps.

“The Ma Deuce definitely has a distinctive sound that will automatically make you want to duck for cover,” Sorensen says. “When you see one, you kind of know you don’t want to mess with that guy.”

But another reason you might spot a Ma Deuce in action points to one of its long-standing weaknesses: tremendous muzzle flash that accompanies every round. At night, these bursts of flame can easily give away a team’s location to the enemy, a tactical disadvantage, especially when firing from a fixed position. And since a fully outfitted M2 weighs 125-130 lbs. with tripod, it isn’t likely to be snatched up easily and carried to a different position on the run.

But mount a Surefire SF3P-50BMG flash hider to an M2HB or an M2A1, and they become virtually invisible. Both of these flash hiders incorporate SureFire’s patented Total Signature Reduction® concept to reduce flash signature by an astounding 99.7 percent from the very first shot fired. An SF3P-50BMG will render a shooting team’s position nearly undetectable, giving the machine gun team the flexibility to employ the weapon system with confidence, knowing that their position will not be compromised by the visible signature.  while also saving lives. In night combat, an M2 fitted with an SF3P-50BMG will also preserve has the added benefit of preserving your natural night vision and stopping NVG white out, a huge benefit on missions that involve the use of night vision devices. 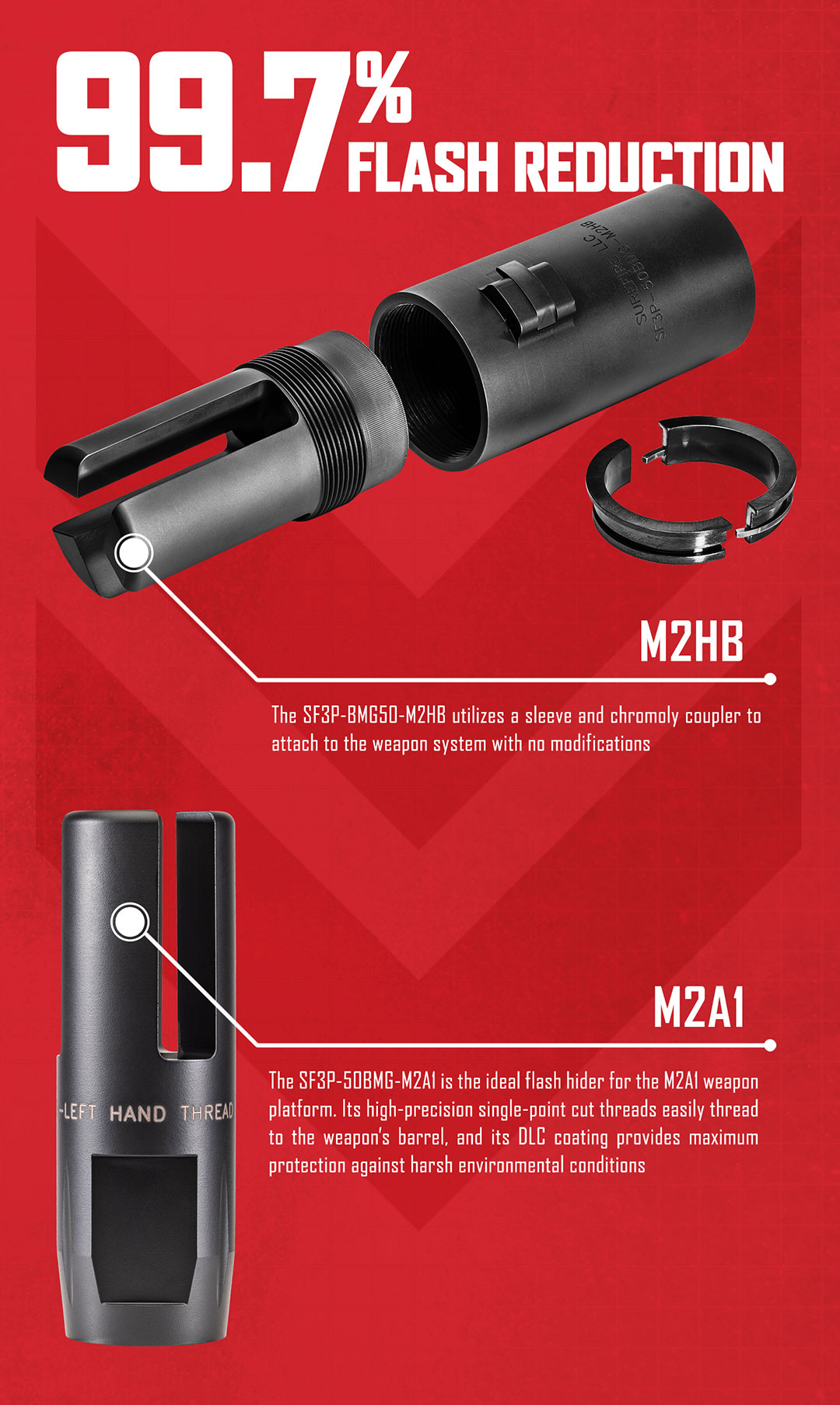 An SF3P-50BMG flash hider works because it isn’t just any flash hider. Engineered by the same team that produced the legendary SureFire WARCOMP flash hider, each one is precision CNC-machined from U.S.A. mill-certified bar stock to the most precise tolerances and DLC-coated for corrosion resistance and long service life. Its robust tines withstand the rigors of sustained full-auto fire in the harshest combat environments.

SureFire manufactures two BMG Flash Hiders, one for the original barrel and one for the newer M2A1 as a direct flash hider replacement. The SF3P-50BMG-M2HB features a precision-machined sleeve that mounts to the weapon system, allowing the flash hider to attach to the M2HB’s non-threaded barrel; a nitride-coated, heat-treated chromoly coupler provides maximum attachment strength. The SF3P-50BMG-M2A1 delivers the same proven design, engineering and critical performance in a flash hider designed to work as a replacement for the current flash hider, offering better performance on the M2A1.

Guenter Schrotzhammer, Director of International Sales, SureFire, LLC, says that SF3P-50BMG flash hiders have already begun to prove themselves in missions around the globe. The SF3P-50BMG-M2HB was tendered at the request of international military units seeking a better solution to reduce the muzzle flash of their M2s during low-light operations.

“The SF3P-50BMG flash hider enables our international end-users to turn their M2s into much better night fighting weapon systems without any permanent modifications,” Schrotzhammer says “Being able to significantly reduce the normally giant M2 muzzle flash to barely visible enables them to become harder to locate for the enemy while simultaneously enabling them to use their night vision devices to full potential.”

The M2 is a legendary machine gun the world over. With the introduction of its SF3P-50BMG flash hiders, SureFire has seized the initiative to reduce the M2’s flash signature and keep our warfighters safe. For more information on the SF3P-50BMG and all of SureFire’s combat-proven suppressors, flash hiders, muzzle brakes and tactical accessories, visit SureFire.com.