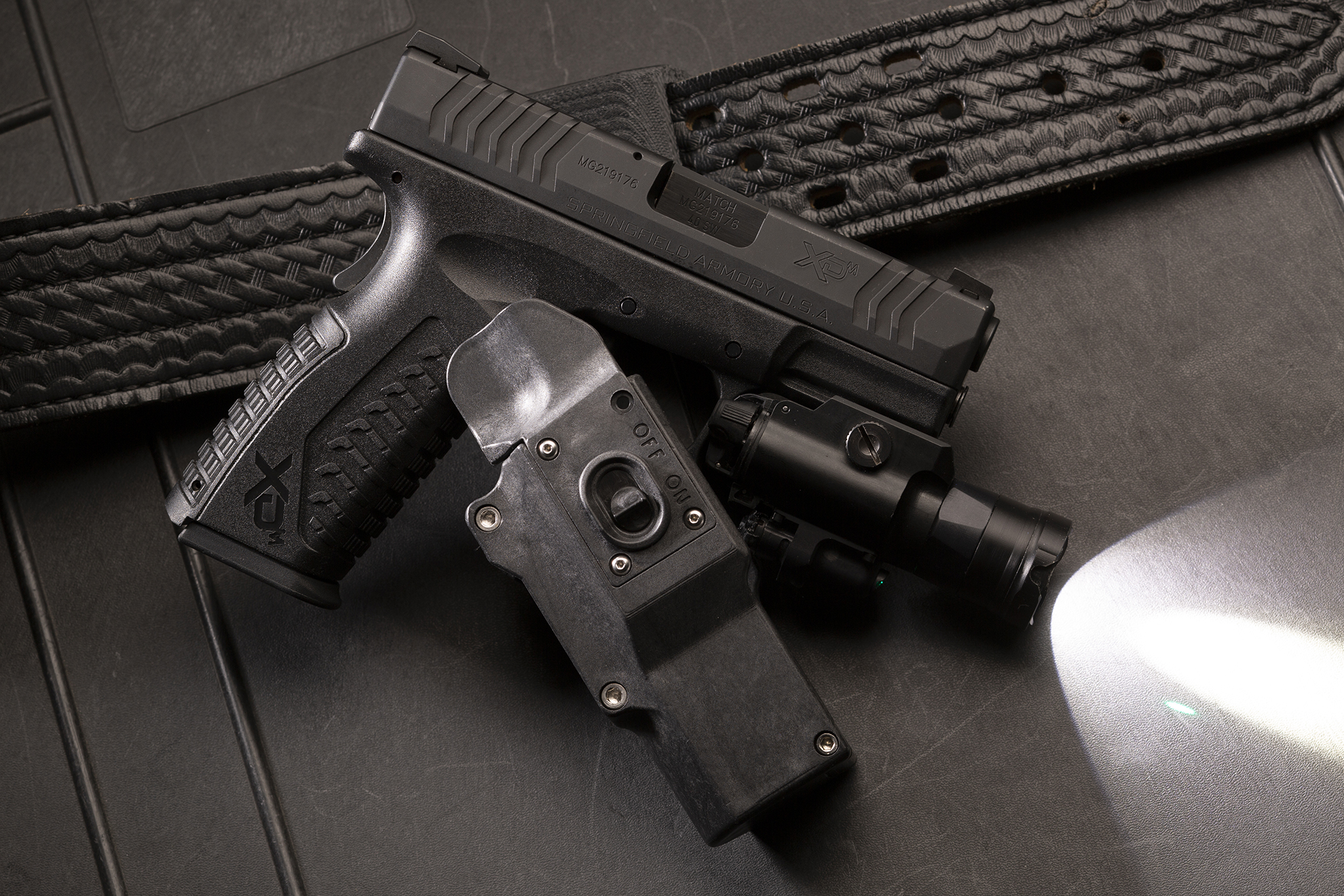 SureFire founder and MasterFire holster inventor Dr. John Matthews has long shared the viewpoint first expressed by legendary U.S. Border Patrol Agent Bill Jordan, and it goes like this: There is simply no second-place winner in a gunfight.

In a matter of life and death, when deadly force must be applied, second-rate training, poor technique and the wrong choices in tactical equipment are simply unacceptable. In fact, they will get you killed. That’s why Dr. Matthews never settles for second best. He has made it his life’s work to develop only the best-performing, highest-quality and most useful tools and gear for everyone, from the most elite military units to law-abiding citizens serious about protecting themselves and their families. The MasterFire Rapid Deploy Holster is another example of SureFire quality on which you can bet your life. It’s designed to be the best holster money can buy. If you truly think of your pistol as a life-saving tool, then you need the best accessories to go along with it, including the best holster money can buy.

In 2019, SureFire has been celebrating its 40th anniversary as the manufacturer of the world’s finest tactical lighting tools and equipment. Dr. Matthews is understandably proud of the tremendous innovation that numerous SureFire products like the MasterFire have brought to market in the past 40 years. Ask him and he’ll tell you that every SureFire product concept begins with the same question in mind.

“The first thing we always ask ourselves here is, ‘How can we make your life more secure?’” he said.

The answers have come in the form of products that created entire tactical market segments: The LPC Model 7 was the world’s first commercial aiming laser; the Model 310 was the world’s first pistol-mounted light; and the Model 6P was the first high-intensity compact flashlight. To the holster market, the MasterFire is every bit as important as these seminal SureFire models.

The ideal open carry holster, the MasterFire is the capstone of an innovative system carefully designed to give shooters every possible advantage in deadly force situations. But to truly appreciate it, we must start a little farther up the chain, with SureFire’s H Series WeaponLights. As Dr. Matthews points out, “You can’t talk about the MasterFire holster without talking about lights, lasers and red dot sights.”

Weapon-mounted lights have been proven extremely effective in improving low-light shooting accuracy, because they illuminate the area in front of the muzzle, providing greater efficiency by eliminating the need to operate a separate light with your support hand. SureFire WeaponLights also offer fingertip control of the light with minimal to no change in your shooting grip, so you get the light you need without sacrificing shooting fundamentals.

Adding a weapon-mounted light/laser combination increases shooting efficiency because a laser when properly zeroed, will show you exactly where your muzzle is pointed. If you want to give yourself the best chance of survival in the widest array of hostile scenarios, you really need both.

SureFire’s H Series WeaponLights provide this critical capability. Based on the popular X Series WeaponLights, the H Series delivers the same features, performance and reliability in chassis specifically designed to interact with the MasterFire holster. There are H Series models to fit every budget, from the durable polymer-bodied XH15 to the XH55 and XH400UH combination light/laser units, and the XH400VH, which offers infrared light and laser capability for use with NVGs.

And there are other accessories that can be mounted to increase a pistol’s potential efficacy. Red dot sights are also highly recommended because they can dramatically improve target acquisition speed and accuracy in a manner virtually impossible with conventional iron sights, especially when the operator is on the move. And carrying a pistol equipped with a suppressor can also be an advantage in terms of both signature reduction and hearing protection.

So what role does the MasterFire holster play with regards to these mission-critical accessories? It’s the only holster on the market that can accommodate a pistol equipped with all of these potentially life-saving accessories while facilitating rapid deployment and quick, secure reholstering. Over two decades in development, it completely changes the tactical holster paradigm by combining unprecedented utility, security, speed, and efficiency.

“We used a new concept that allowed us to spend a lot more time and effort in tooling than would normally be practical,” Dr. Matthews said. “We made it to where the holster interfaces with something that’s common to a wide variety of guns rather than interfacing with the gun itself. Normally, you need a different holster for every different variation of a gun from the manufacturers. We interfaced with what goes on the rails — in particular our [H Series WeaponLight] products.”

The result is a lightweight, durable holster with a precise, proprietary mechanical interface. It securely holds most any model of railed handgun equipped with a SureFire H Series WeaponLight and positions it at an advantageous angle for a fast, consistent draw stroke, facilitating consistent sub-second presentations.

“The MasterFire will not only accept different pistols, but it will do so with a variety of accessories mounted on them — for example, a SureFire SF RYDER suppressor, a red dot sight, and our light/laser systems,” Dr. Matthews said. “This one holster can accommodate all these different accessories, so you don’t have to go buy a new holster when you decide to put a different accessory on your gun or change to another model of gun. Then when you look at performance, it is faster than most, it’s lighter too.  It’s just better all around.”

In addition to its smooth draw stroke, the MasterFire’s unique light-activation switch can be set to automatically activate an H Series WeaponLight when the gun is drawn, saving precious time in high-stress situations by making one-handed manipulation easier. The WeaponLight is also deactivated when the gun is holstered. The feature can also be locked out for situations where automatic light activation is not desired.

Despite its open design, the MasterFire’s proprietary lug-and-cam system locks the firearm in place with Level 3 retention, utilizing primary and secondary locking systems that are released by an ergonomic thumb latch for rapid weapon deployment. You might as well forget about trying to improperly remove the weapon from the holster when these lock mechanisms are engaged.

“If you try to mechanically force the gun out of the holster, to basically distort or break the holster in order to get the gun free, you’d have to break the pins to get it out,” Dr. Matthews said. “We’ve done tests, and it took 600 pounds of force to do that.”

For sheer versatility, a secure hold, smooth and rapid weapon deployment, and the ability to accommodate most any handgun or handgun accessory, there’s simply no other holster like the SureFire MasterFire Rapid Deploy Holster.

“We couldn’t afford to do it if we had to make it for 30 different gun models,” Dr. Matthews said. “But we were able to do that with one design. It’s a totally different concept. Everything else is like putting your gun in a bag.”