Recently, SureFire hosted one of Blowers’ low-light courses for its employees, allowing them to obtain golden nuggets of knowledge from a top-level instructor. We chose to go low-light to shake out some new gear and further our understanding of the use of our products. Blowers teaches that any competent shooter should be able to perform a given low-light drill with a minimal time increase relative to the same drill during daylight. There is generally a time increase due to light activation and potential slight delays in target acquisition, but matching your daytime performance is the goal.

For example, one standard for a shooter is to draw from the holster and accurately hit an A-zone on a target with one shot at 7 yards in 1.5 seconds. Blowers maintains that the same shooter should be able to complete the same drill in 1.75 seconds, granting a quarter second for activating the light on the draw. All of that said, the importance of training in low light conditions and getting repetitions with manipulating lights becomes apparent rather quickly.

A unique and vital approach that Blowers brings to the table is performance tracking, and that’s vital when comparing low-light performance to daylight performance. Blowers breaks down the mechanics you need to practice getting up to speed, using athletic analogies to explain the basic yet crucial concept behind his courses to novice and experienced shooters alike. 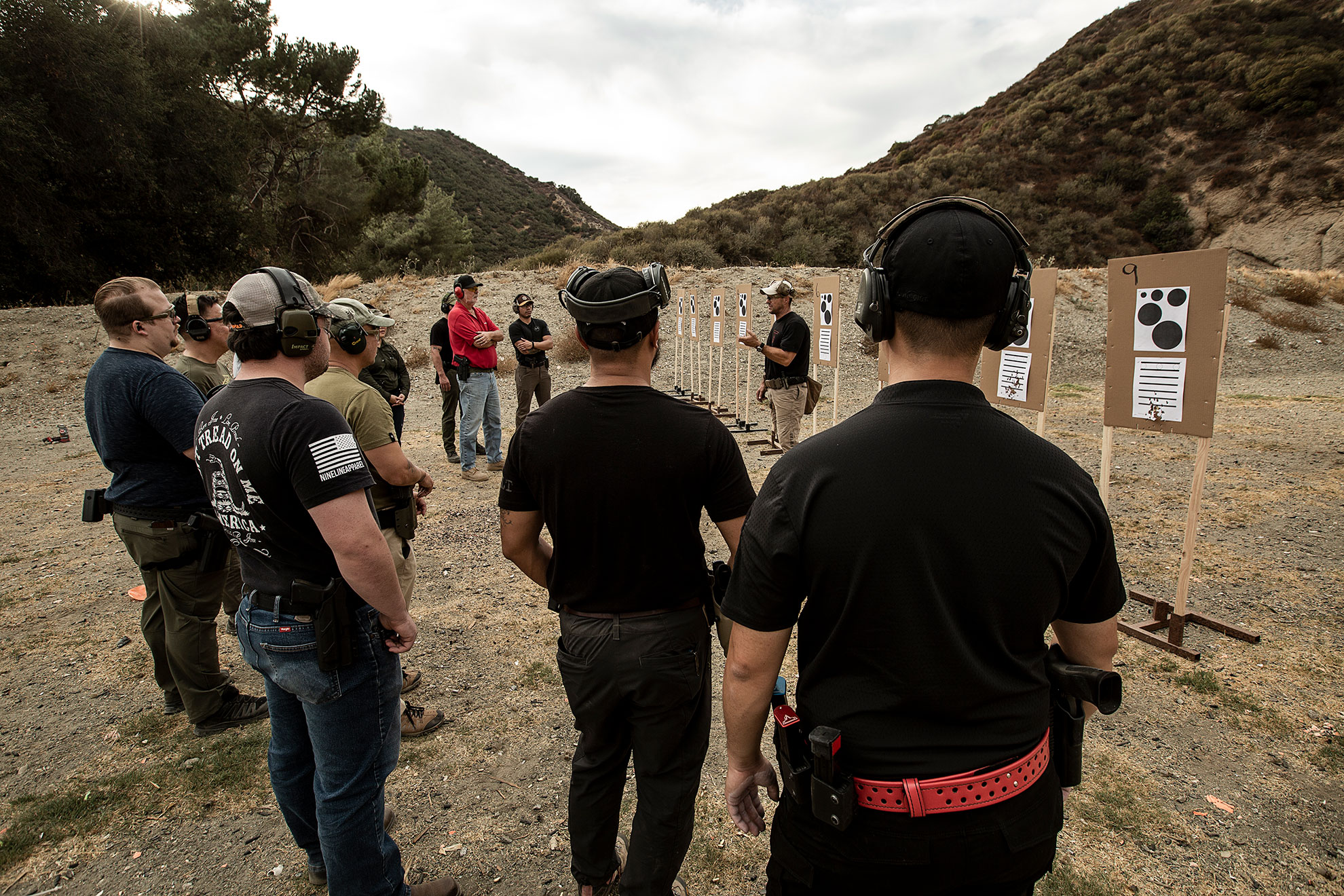 “If I need to run a mile and a half in under 11 minutes to qualify for my team, or if I need to be able to deadlift twice my body weight, and I’ve never done either of them before, am I going to be able to start out by running that distance in 11 minutes or stacking weight on a barbell and lifting that 400 pounds right away?,” Blower says. “Of course not. If I try that, I’ll just end up hurting myself. If the goal is to draw from the holster and score a hit in 1.5 seconds, and when you start out, it takes you 6 or 8 seconds, I do not care. The point is to establish a baseline, so you know what you need to work on to get to that qualifying time. Then, with practice, you track your performance so you can see where you are and where you need to go.”

This method of performance tracking is one of the most significant takeaways from a Blowers course. It is truly in line with the “give a man a fish, and you feed him for a day; teach a man to fish, and you feed him for a lifetime” mindset. This method allows students to continue growing beyond the Tap-Rack Tactical course and understand the difference between the one-shot wonder and consistent performance.

“In any of these, you want to know where you live, and you are looking at what you can accomplish consistently,” Blowers says. “I might be able to accomplish a ‘1 shot draw and hit’ in under a second, but that doesn’t mean I can do it every time. You want to determine your average by repeating the drill several times and then throwing out your ‘miracle’ time and your slowest time to get to that baseline average. Once you have that, you can work on consistently hitting that average while maintaining accuracy, and after that, you can work on cutting down your time.” 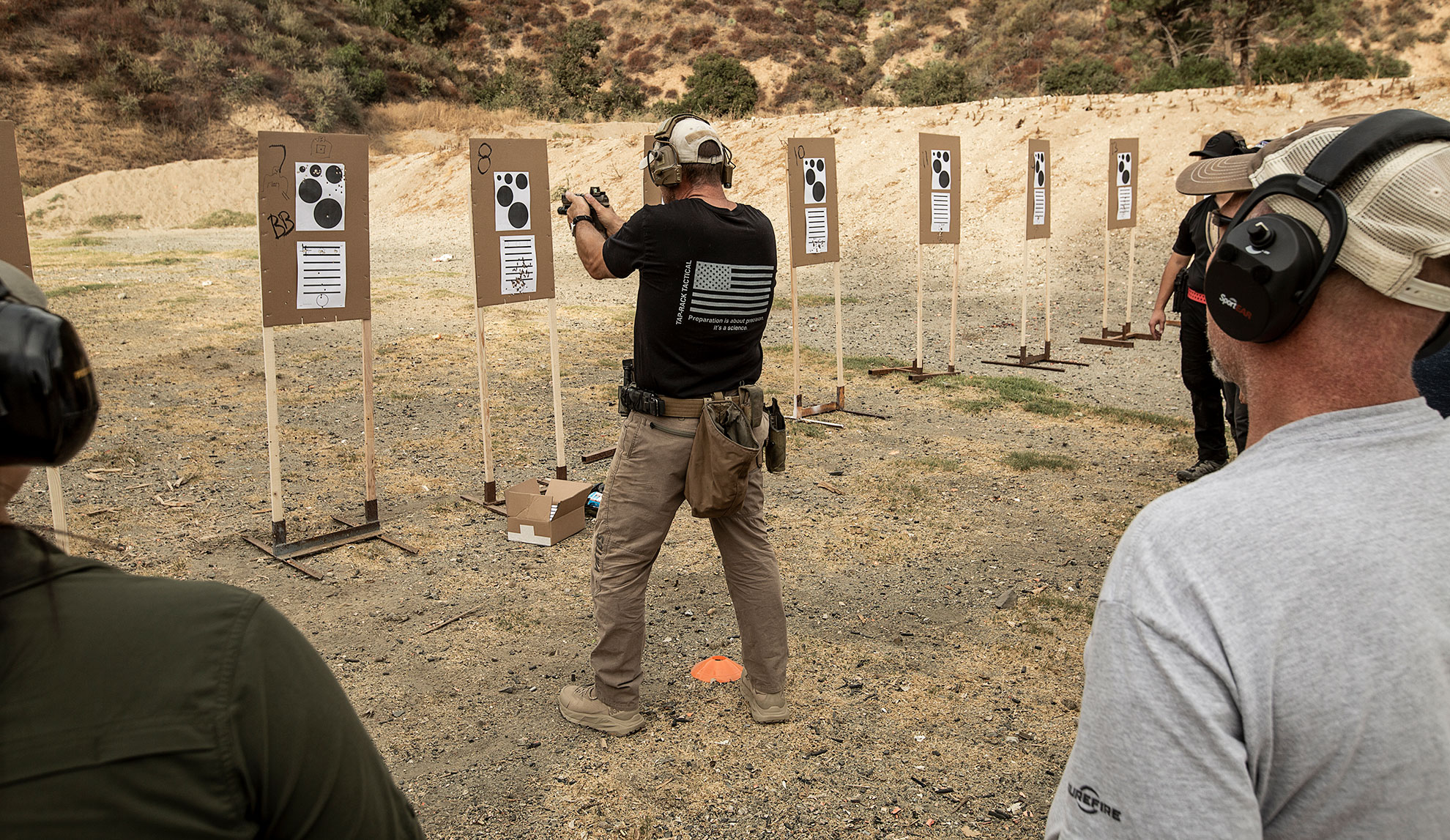 Another unique aspect of Blowers’ outlook is that he doesn’t have a rigid allegiance to any one technique for grip, stance, or recoil control. Instead, he shows multiple options for solving those problems and encourages students to explore what works best for them. In introductory courses, this typically entails several specific drills to isolate components such as grip or stance and then monitor the various methods’ results to determine which is best for the individual. This is a stark contrast to most of the training industry, where instructors have students do things precisely the way they do, regardless of size, stature, background, etc.

Blowers taught two waves of SureFire employees at Burro Canyon Shooting Park in Azusa, California. The employees consisted of individuals with varying degrees of skill; from competitive shooters and military veterans to those with only a CCW class. While we all swam in different ponds skill-wise, the point is, after all, to become a better swimmer. Blowers drives this message home with tremendous charisma and a masterful mix of English and cuss words that he’s elevated to an art form. He’s both serious and seriously funny. You never know what’s going to come out of his mouth next, but you don’t want to miss a word of it, and you’re damn sure going to remember it. 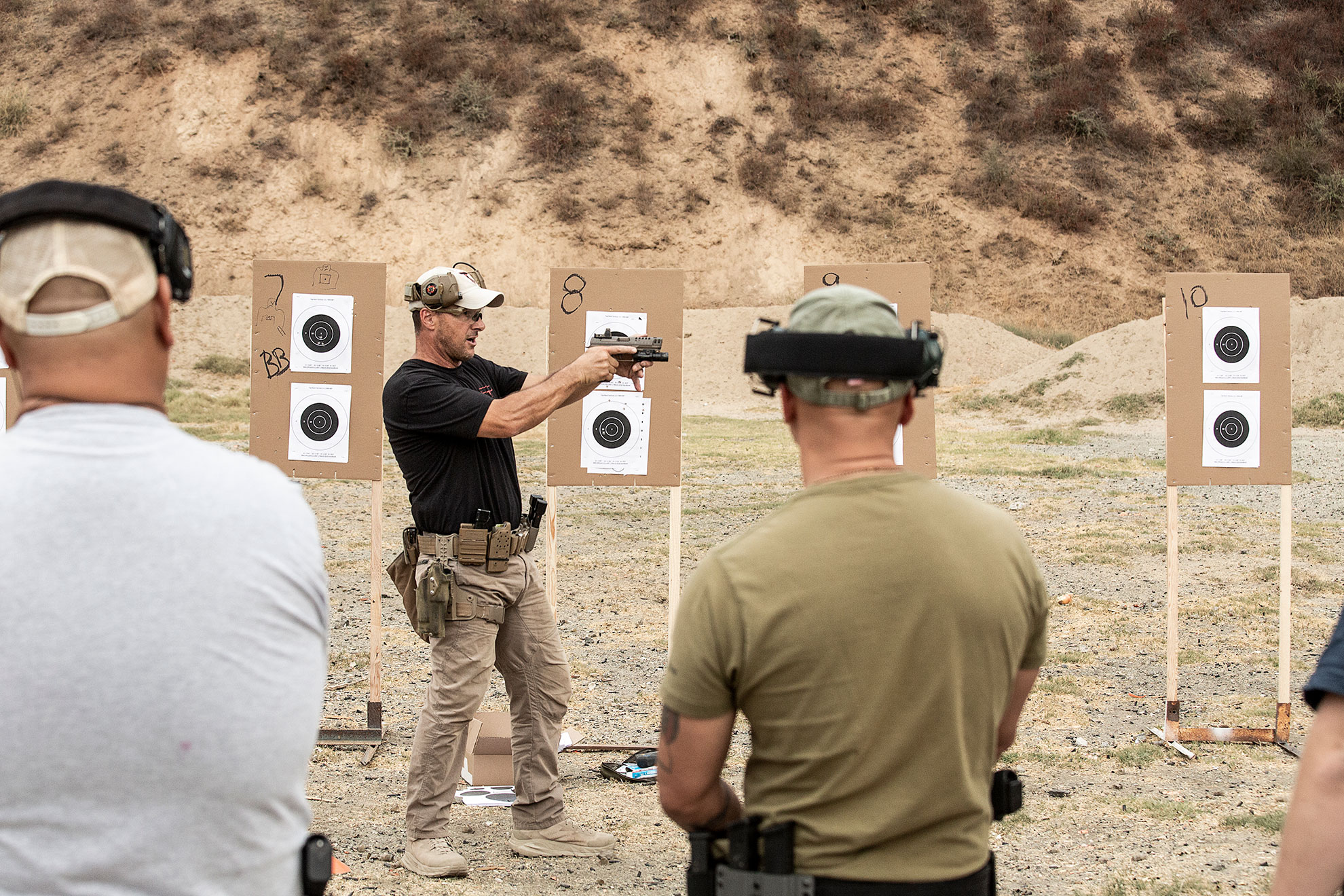 This specific course’s framework involves running through a series of drills during the daytime and then running through them again after sunset. After some reps shooting with a hand-held light in conjunction with the handgun, it is clear the immense advantage a Weapon Light gives in just about every way. That said, just like any new tool, the addition of a Weapon Light requires training and practice. Light discipline may be one of the most challenging things for a shooter to master. Blowers’ low-light course teaches students how and when to manipulate their Weapon Lights to maximize tactical advantage and reduce the chance of giving their position away to an adversary while accomplishing manipulations such as reloads or malfunction clearing in a gunfight.

Tactical and speed reloads are incorporated into these exercises, and it’s surprising just how much low-light conditions increase the stress factor. The goal is to get your handgun up and running again as quickly as possible, and every fraction of a second that you’re not in the fight is time that could mean the difference between winning and losing. Weather conditions such as rain can also add to the challenge. That’s exactly what the Friday group faced when inclement weather moved into the Southern California area.

“We were shooting in the rain for about three hours, and it really added to the stress of it,” SureFire Suppressor Division engineer Michael Standen said. “Some of the manipulations, like racking the slide or gripping magazines were a lot harder. As Bill said, if you’re a one-and-a-half-second man from your concealed draw on a 70-degree day in a T-shirt, what are you in the winter with a heavy jacket on? What are you in the rain? If you can’t do one and a half seconds in those conditions, then you’re not a one-and-a-half-second man. Basically, it’s the weakest link in the chain. Your slowest draw is your number. And it’s not just rain. It could be water, mud, blood, oil…Having some kind of adversity like that is useful.” 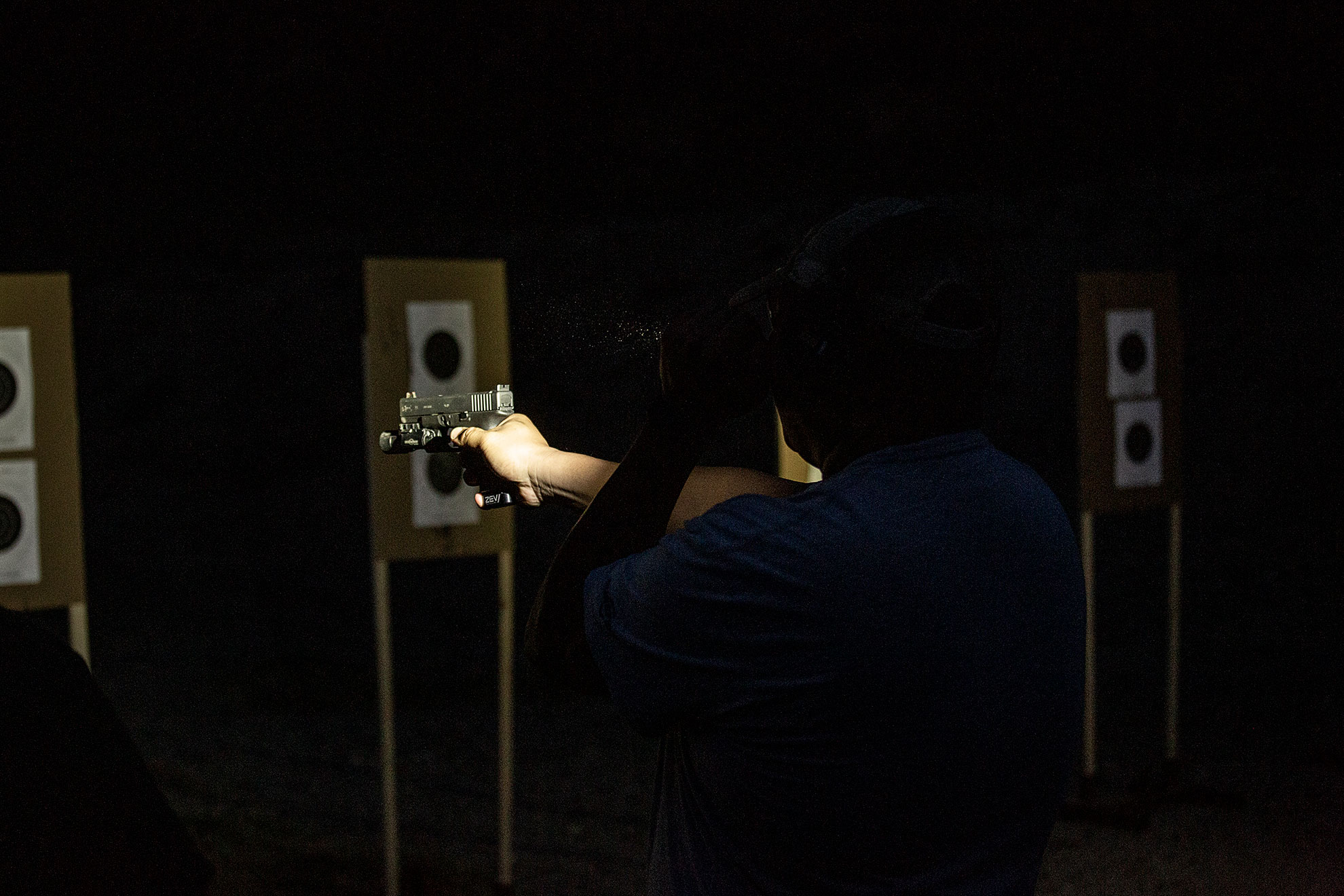 Blowers’ curriculum succeeded in improving the skills of everyone in attendance. All of the employees in both groups lowered their respective par times throughout the night. More importantly, they went home knowing what they needed to work on to keep lowering them. SureFire Graphic Artist Alex Azcona was one of the many who felt that he left the course with a lot more knowledge and skill than when he began.

“Bill’s instructing style is thorough but not overbearing. He makes things easy enough to understand, and it becomes apparent that there is a lot to work on,” Azcona said. “He brings solid context with stories involving real-life scenarios that back up what he is teaching. He also gives you multiple ways to do things. He tells you his preferred methods but gives alternate options as most techniques aren’t one-size-fits-all. He keeps an open mind. I’ve taken a course from him before, and continue to learn with each class. It’s very helpful.”

Azcona’s co-worker, Scott Greytak, also left with some key takeaways from the course. “The big takeaway for me was just the application of the light, knowing when it needs to be on, but more importantly when it needs to be off,” Greytak said. “There are a lot of tactics behind it that I never thought of. Like there are times when you don’t want to umbrella light the room or be running with the light on. Then there are other times when you may want to keep the light on your target so they are blinded and cannot see exactly what you are doing. I really liked the class. It was my first time taking a low light course, and I took away an immense amount of knowledge.” 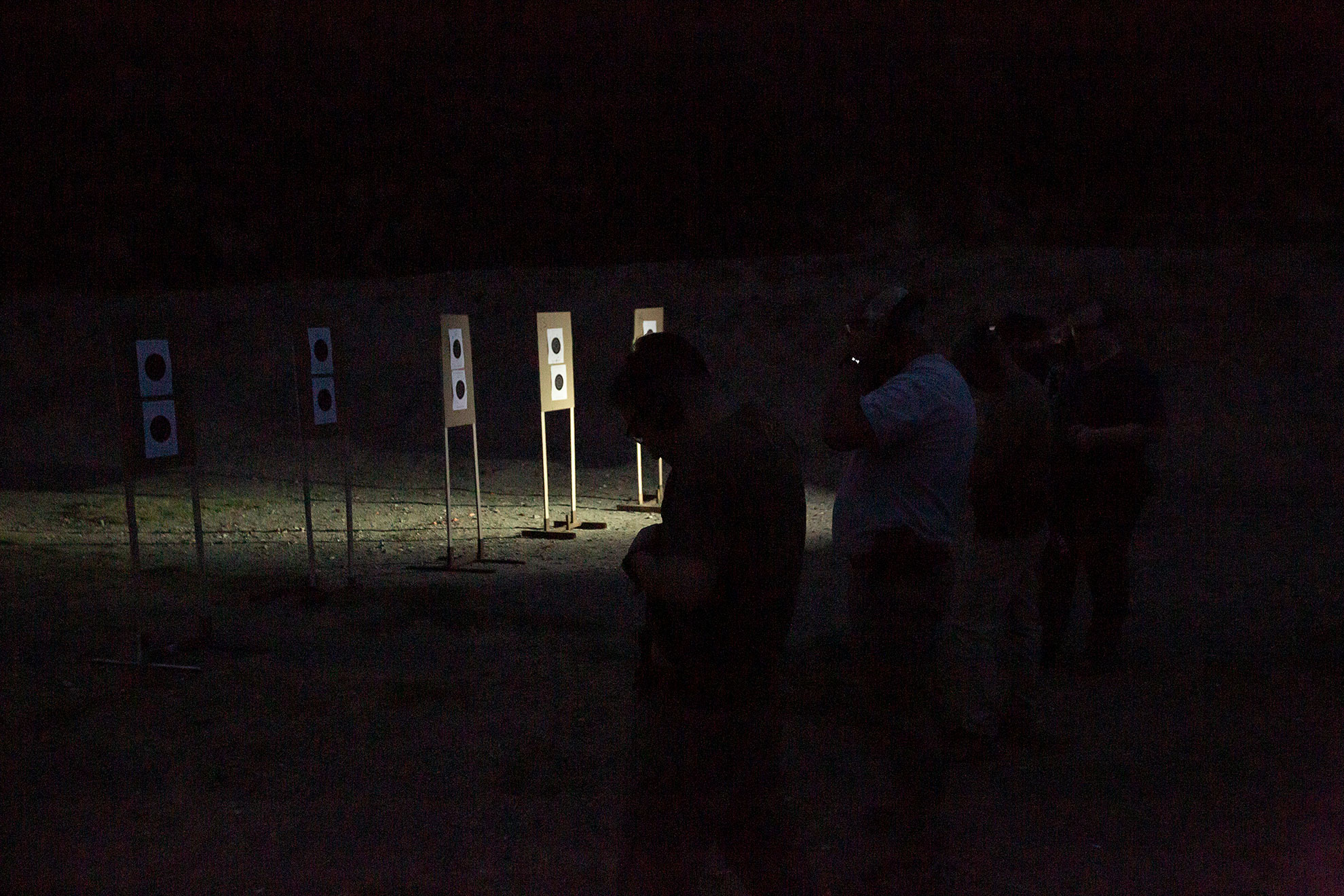