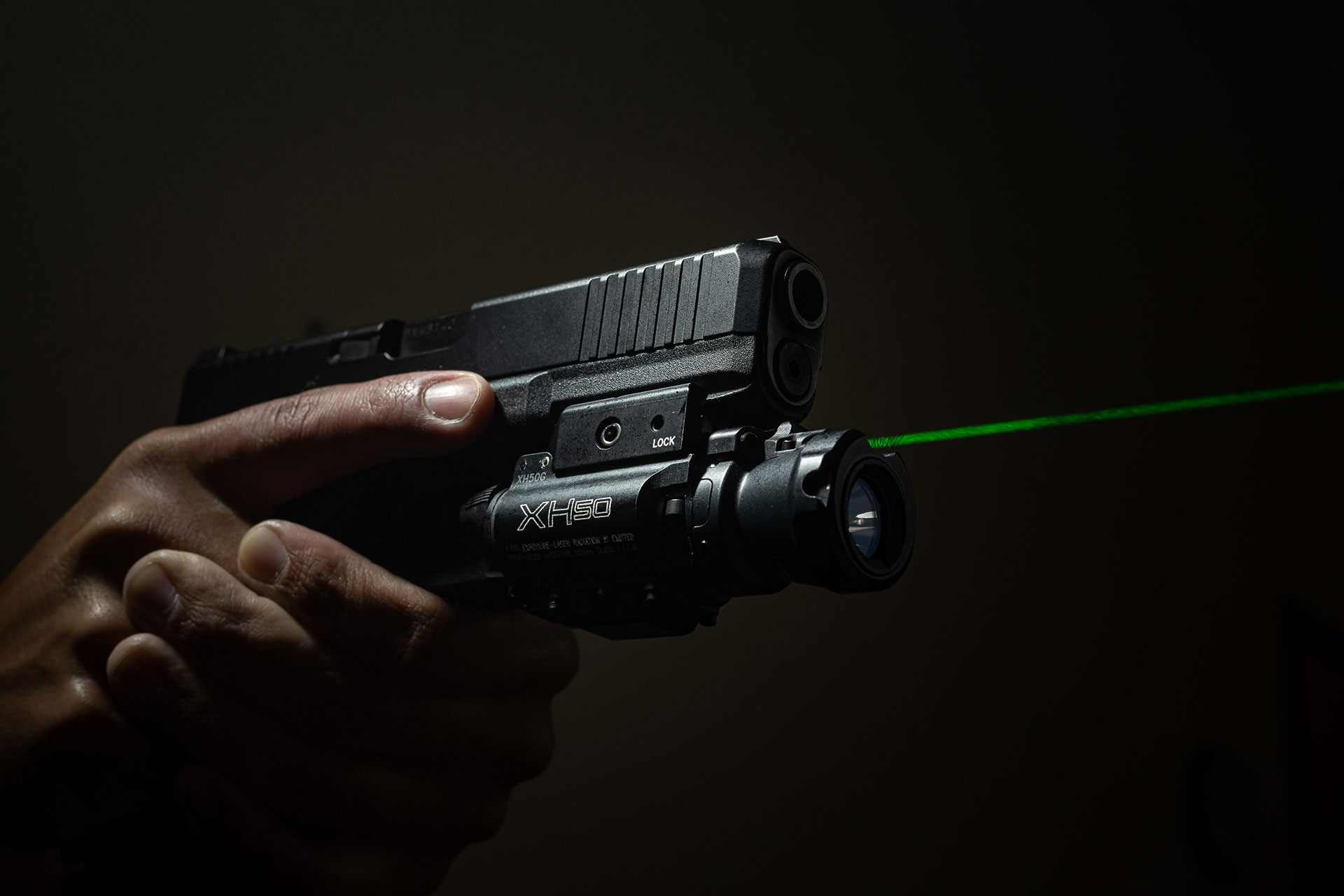 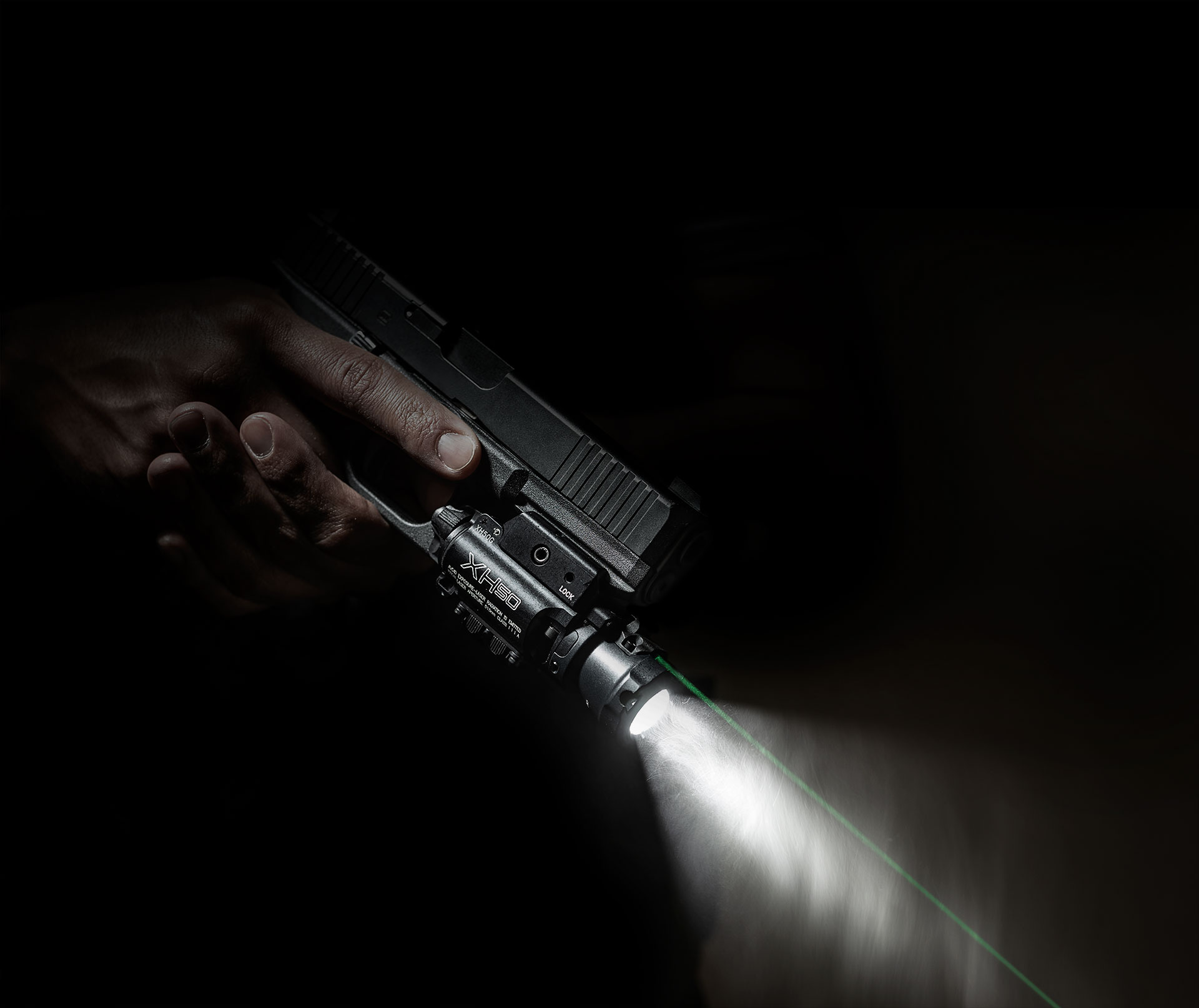 SureFire has been the pioneer in laser aiming device technology for more than 40 years. The new XH50 WeaponLight continues the tradition of innovation, high performance, and rugged durability that makes SureFire the most authentic and emulated brand in the tactical illumination tool market.

The XH50 differs from other SureFire laser-equipped WeaponLights in that it’s the first to mount the laser module above the light bezel. This configuration benefits the user by positioning the laser closer to the bore center of the weapon, reducing impact offset at various distances so that the deviation between the point of aim (the laser dot) and the point of impact is minimized. The XH50’s 5-milliWatt (515-nanometer) Class IIIa green laser is highly visible in a wide variety of lighting conditions, so you can easily see where your muzzle is pointed, day or night. Windage and elevation screws on the XH50’s body ensure precise zeroing and easy adjustability, which takes the hassle out of setting it up once you mount it to your weapon. Both screws also feature a secondary locking screw to prevent laser drift once you have zeroed the XH50 on your weapon. The versatile XH50 can be quickly and securely attached to any handgun or long gun equipped with a Universal or Picatinny rail via its T-slot thumbscrew mount.

SureFire also pioneered the use of 123A batteries for use in flashlights and WeaponLights. The XH50 uses two of them to power up 850 lumens of blinding white light via its recoil-proof LED. A proprietary parabolic reflector shapes the emitter’s output, producing an ideal beam for tactical applications because the beam configuration clearly illuminates the main object of interest while providing enough surround light to help you maintain situational awareness. 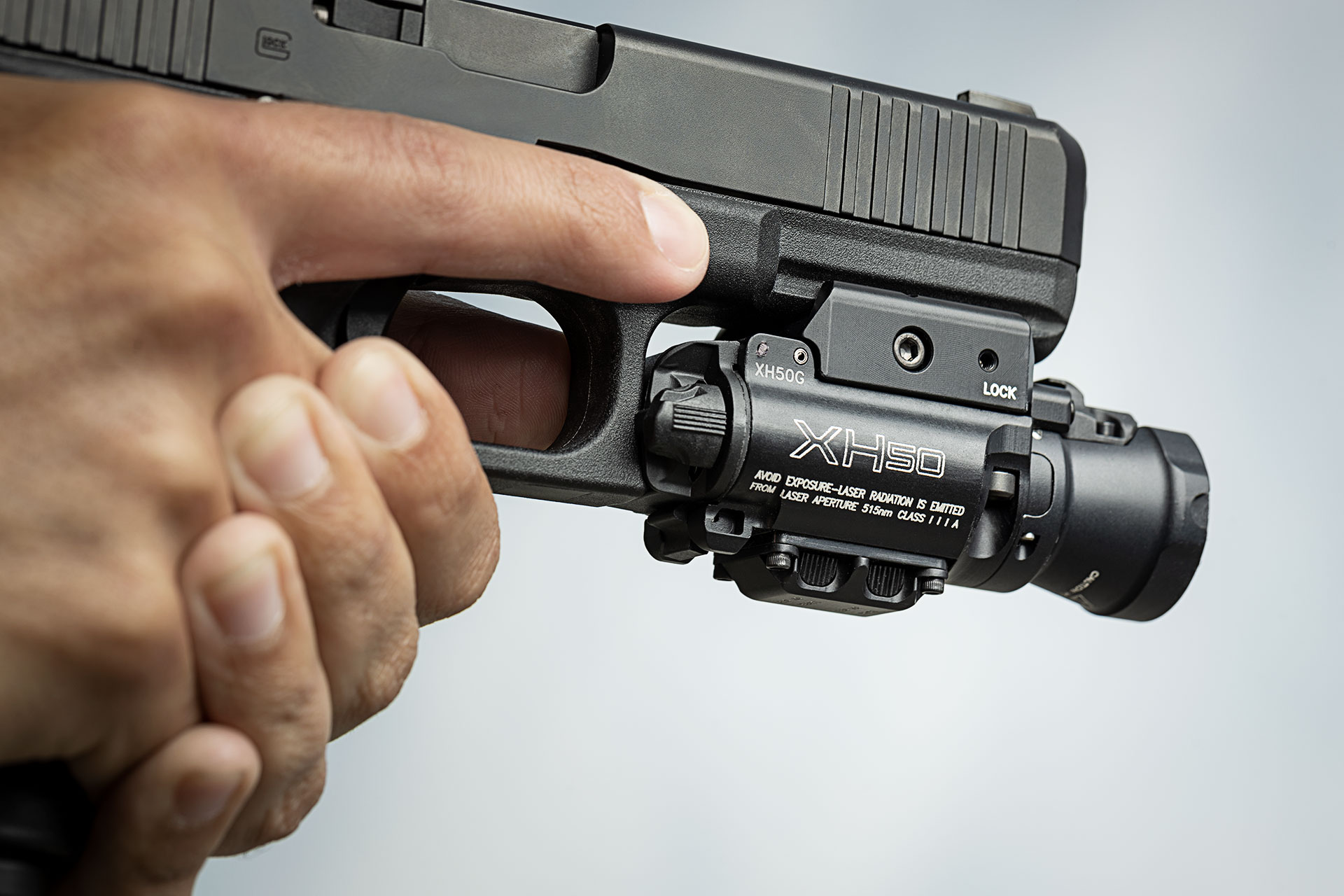 Like all SureFire X-series WeaponLights, the XH50 provides instant and intuitive one-finger activation via SureFire’s tried-and-true ambidextrous switching at the rear of the body. SureFire’s switching profile gives you ultimate control of your lighting requirements: Press and hold either the right or left side of the toggle switch to activate and release the switch to deactivate. For constant-on operation, rotate either toggle switch up or down to activate; rotate in the opposite direction to deactivate. A pair of mode selector switches on the bottom of the housing also provides various light/laser activation modes. One switch toggles the white light on or off; the other toggles the green laser on or off. So, you can quickly and easily set up your XH50 to activate laser only, white light only, white light and laser, or select full-disable to guard against accidental activation when necessary. 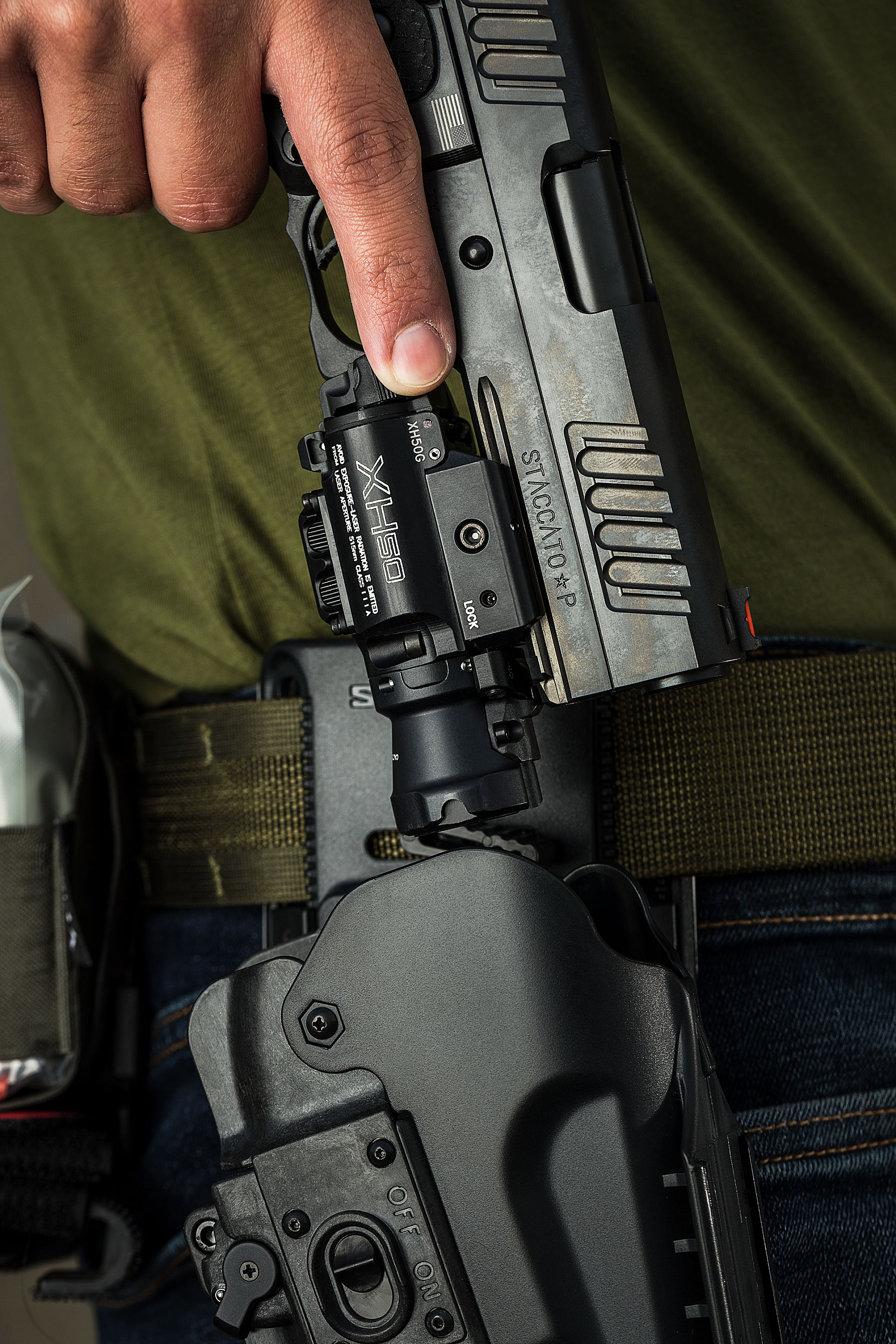 The XH designation in its nomenclature means that the XH50 is designed to interface with the MasterFire® Pro Rapid Deploy Holster, the key component in SureFire’s patented weapon retention system, which accommodates a wide variety of modern handguns. A unique design, the MasterFire holster interfaces with a handgun by indexing off any H-Series WeaponLight mounted to the gun. The XH50’s unique bezel utilizes cam slots and pin slots on both sides of the body to lock it into the MasterFire holster and secure the weapon at an advantageous angle for quick deployment. Every XH50 comes with the necessary crossmembers for easy installation on Universal or Picatinny rail-equipped handguns, long guns, or the Sig Sauer P320 handgun.

Every X-series WeaponLight is designed, engineered, and manufactured to withstand the test of time. That’s why SureFire uses only the finest lightweight aerospace-grade aluminum to precision-machine the XH50 body and finishes it with a MIL-A-8625 Type III, Class 2 hard anodizing for superior corrosion and abrasion resistance. The body is also O-ring and gasket sealed to keep moisture outside the body in inclement weather. The SureFire XH50 is a powerful tool, and you can count on it to give you a critical advantage in high-stress environments.

For more information on the SureFire XH50 and the entire family of SureFire’s proven WeaponLights, handheld lights, and other tactical tools, visit SureFire.com.