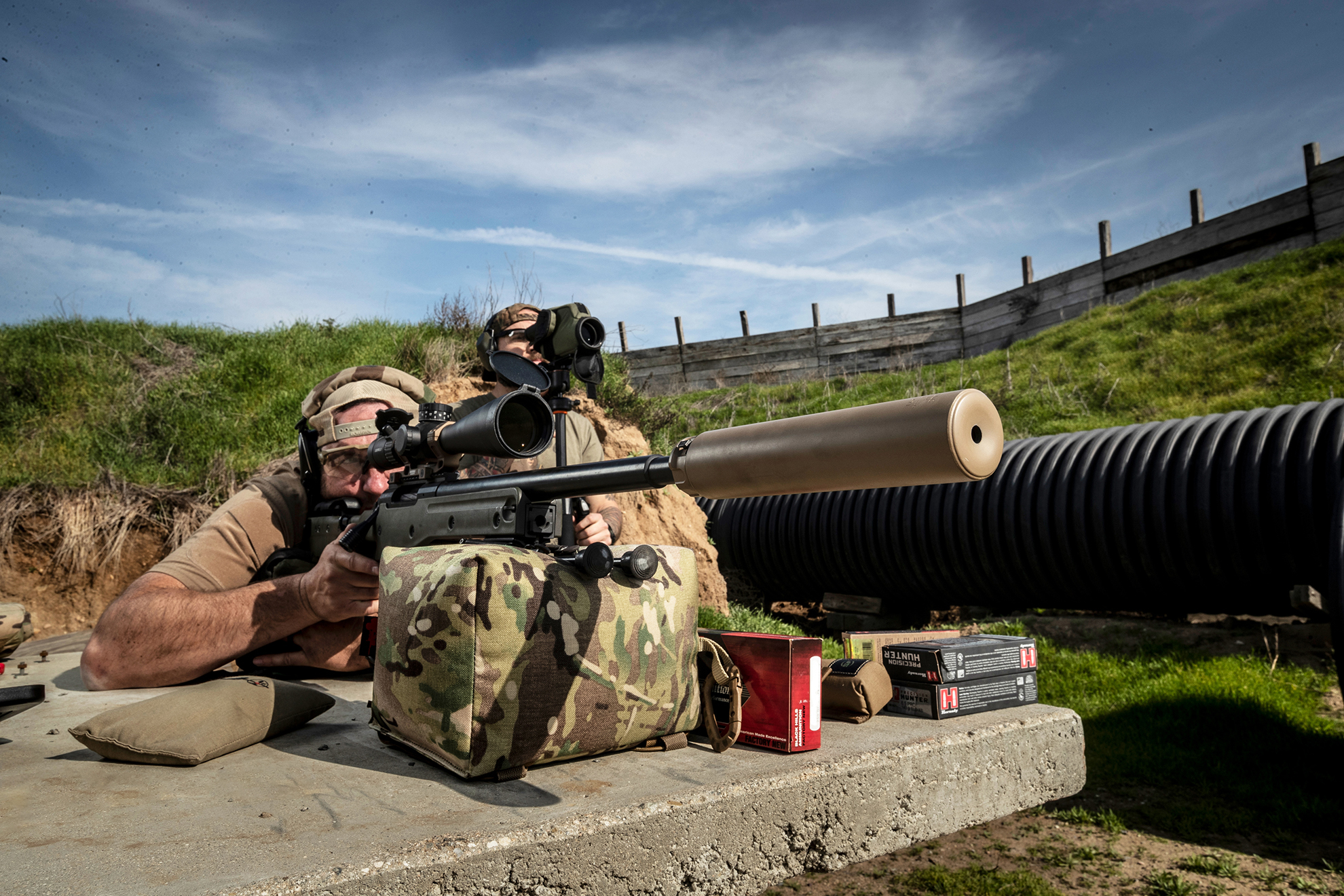 SureFire has released its latest titanium suppressor, the SOCOM408-ELR, to address the need for a premium, military-grade suppressor for .408 CheyTac long-range rifle users.

The .408 CheyTac shares a basic commonality with the .50BMG, .338 Lapua, and .300 WinMag: All of these rounds offer favorable hit probabilities beyond 1,000 yards. Developed as an anti-personnel/anti-sniper/anti-materiel round by Dr. John D. Taylor and machinist William O. Wordman in 2001, the .408 CheyTac delivers impressive ballistics, making it ideal for sniper and extreme long-range applications. With a 419-grain bullet, the .408 CheyTac’s 3,000-fps muzzle velocity is greater than the .50BMG, while its 8.29 lb.-ft. of muzzle energy delivers more punch than either the .338 Lapua or the .300 WinMag. The .408 CheyTac is the current (though unofficial) record holder of the longest shot to hit a stationary target. In 2018, Bill Poor of Tuscola, Texas, used a 390-grain bullet to strike a target at a distance of 5,280 yards — or 3 miles — breaking the old record by 280 yards. By the way, that shot took more than 14 seconds to impact the target.

Just like its contemporaries, the .408 CheyTac also packs a loud muzzle report. That is precisely why SureFire engineers developed the SOCOM408-ELR suppressor. The SOCOM408-ELR is expertly engineered for .408-caliber CheyTac users by the same team that created SureFire’s SOCOM contract-winning suppressors for the world’s elite military units. SureFire’s esoteric knowledge in suppressor technology results in a suppressor optimized for bolt-action precision long-range rifles. It provides amazing sound and flash attenuation for sniper rifles, and it is an excellent option for decreasing range noise in Extreme Long Range (ELR) use. The SOCOM408-ELR is also compatible with precision bolt-action rifles chambered in .375 CheyTac and .375 EnABELR. 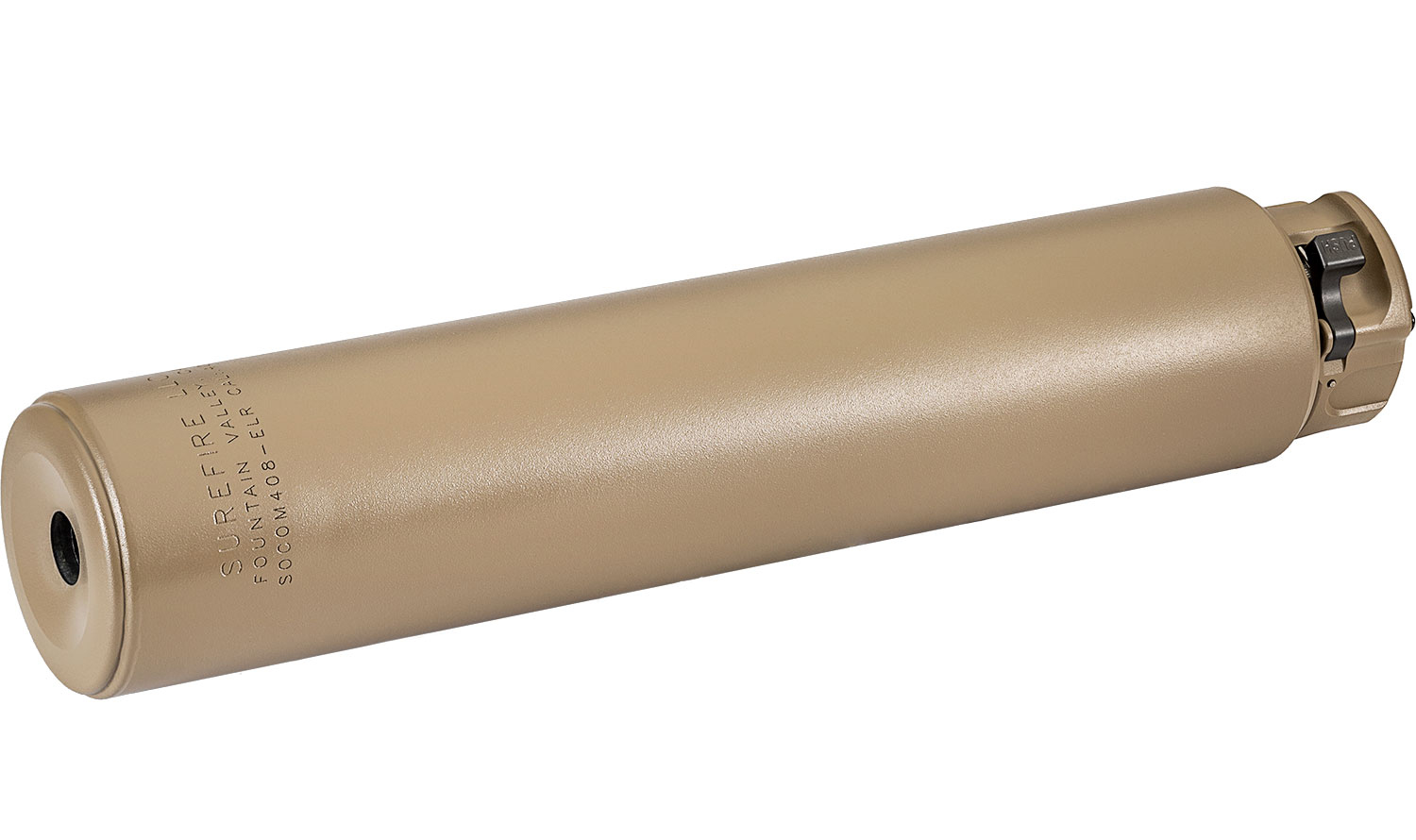 The SOCOM408-ELR’s noise-canceling baffle design is based strictly on the technically superior SureFire models that won the most extensive and rigorous suppressor trials in USSOCOM history. In addition to maximum sound, flash, and dust signature reduction, it also provides minimal and consistent point-of-aim, point-of-impact shift when engaging targets at extreme distances. The SOCOM408-ELR’s bore concentricity exceeds the specifications of match-grade ammo, helping to maintain the pinpoint accuracy that is critical in ELR applications. Every SOCOM408-ELR is test fired to ensure it meets strict accuracy standards (less than one minute of angle) and point-of-impact shift (less than one minute-of-angle shift in group center) compared with the unsuppressed weapon.

In a market where the large majority of competitors source lower-quality titanium from overseas, the SOCOM408-ELR features American-made, military-grade titanium in its outer tube, inner assembly, front plate, back section, and lock ring. The entire suppressor weighs a mere 22 ounces. It is light enough to minimize any adverse effect on weapon handling characteristics and maintain superior accuracy, and yet the ELR’s robust construction still meets SureFire’s strict durability standards. Every unit is coated with DLC and Cerakote finishes to resist abrasion and corrosion for maximum reliability and long service life. SureFire’s patented Fast-Attach® system allows lightning-fast and rock-solid attachment/removal — hot or cold — no tools required. SureFire’s innovative SOCOM mounting adapters provide multiple bearing surfaces for tight mating with the suppressor back section, ensuring a precise, consistent fit that maintains accuracy regardless of multiple attachment/removal cycles.

Proudly designed, engineered, and manufactured in the U.S.A., the SOCOM408-ELR continues the SureFire tradition of producing the finest combat-ready suppressors available. For more information on the SOCOM408-ELR and SureFire’s entire family of world-class suppressors, visit SureFire.com.